Oxfam teams up with Tigo Money 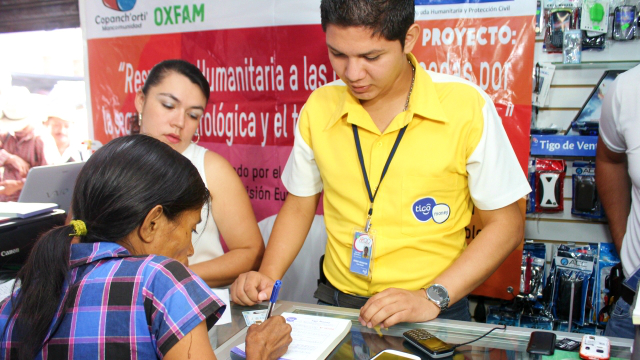 A pioneering digital partnership is underway between international aid organisation Oxfam and Tigo that could transform the way people in need get financial help in the future.

For the first time, hard-hit families in Guatemala’s Chiquimula province, an area badly affected by child malnutrition, the San Marcos earthquake in 2012 and drought, are receiving humanitarian cash transfers from Oxfam via a Tigo mobile money service.

Tigo agents in this remote region can deliver the money thanks to mobile networks rather than formal banks.

Families issued with a sim card and personal pin number receive this money over the counter, as soon as Oxfam has sent them authorisation via sms.

The money goes not only towards helping families feed their children, but also towards financing and encouraging more sustainable farming methods.

The digital approach means that Oxfam, which works in 94 countries worldwide, can respond to emergency situations more quickly and cost effectively than before.

According to Ivan Aguilar, Oxfam’s Human Response Programme Coordinator in Guatemala: “Tigo Money offers us the possibility to get our service to communities that are most vulnerable – the communities where we work.”

Similar trials have taken place in a growing number of countries worldwide, where getting cash to communities can be logistically complex.

Oxfam has trialled a similar system to reach severe drought affected communities in Kenya. In Haiti, the Haiti Mobile Money Initiative was set up to support families devastated by the 2010 earthquake.

In Guatemala, the pioneering partners are exploring digital aid further, including a System of Emergency Reaction which will allow them to organize help within 48 hours following natural disasters.

Details are being finalised as well for an aid project for poor communities in the region of Baja Verapaz, Guatemala.

“In an age where technology is transforming all our lives, it is so important that it serves people who stand to benefit most.” MILLICOM

Tigo’s General Manager in Guatemala Luis Fernando Valladares Guillen, said: “At Tigo Money we really appreciate that an organization such as Oxfam has chosen us as a channel to reach poor families in a fast, safe, and accessible manner thanks to our large network of authorized agents throughout the country.”

Hans-Holger Albrecht, the President and Chief Executive of Millicom, said: “I am delighted that we have been able to support Oxfam’s vital humanitarian work in Guatemala. In an age where technology is transforming all our lives, it is so important that it serves people who stand to benefit most.”

Notes to Editors: Clean, unedited video with natural sound (September 2013, Chiquimula, Guatemala) will be available to broadcasters on request, for downloading.